Gratitude is the central virtue of a missionary 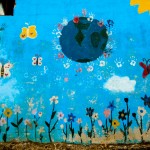 Shortly after moving out of La Carpio in December 2011, a friend suggested that I read a book called ¡Gracias!, by Henri Nouwen. The book is a collection of his journal entries from 1981-1982, during a six-month period when he attended language school in Bolivia and then moved into a “young town” on the outskirts of Lima, Peru. It includes a lot of commentary on missionary work, the state of the Latin American Church at that time, cross-cultural service, and liberation theology.

The book was helpful for me because it crystalized some of the lessons I carried with me when I left La Carpio. The principle lesson being the inspiration for the title: ¡Gracias! – Thanks! On page 16 he states it most directly –

“Gratitude… becomes the central virtue of a missionary.”

He includes a bunch of commentary in passing that connected very strongly with my experiences living in the informal settlement – “in a poor country, the children always suffer the most.” There seems to be a lack of expressions of affection between married people. The two most treasured items in the house are the television and the refrigerator. The biggest problems for him were dust, noise, and a lack of “quiet times.”

After his first week of living in the “slum,” he writes:

“right now I would be physically, mentally, and spiritually unable to survive without the opportunity to break away from it all once in awhile. All the functions of life, which previously hardly required attention, are complicated and time-consuming operations here: washing, cooking, writing, cleaning, and so on. The winds cover everything with thick layers of dust; water has to be hauled up in buckets from below and boiled to be drinkable; there is seldom a moment of privacy, with kids walking in and out all the time, and the thousands of loud sounds make silence a faraway dream. I love living here, but I am also glad that I can escape it for two hours a day and for one day a week. Living here not only makes me aware that I have never been poor, but also that my whole way of being, thinking, feeling, and acting is molded by a culture radically different from the one I live in now. I am surrounded by so many safety systems that I could not be allowed to become truly poor. If I were to become seriously ill, I would be sent back to the United States and given the best possible treatment. As soon as my life or health were really threatened, I would have many people around me willing to protect me.” (115-116)

In the midst of this rather dismal setting, Nouwen writes about how the laughter and play of children is a source of strength for him. This resonates with my experience as well. So often I would come home and the kids would be doing screaming and playing… tag, bobbing-for-floating-mangos, marbles, “trompo” (tops). Most recently they had adopted a little bunny named “Brian.” Once I came to pick them up for church on Sunday and Zue was climbing up a small tree by the house and laughing. She’d found a discarded reefer, that I later found out had been thrown there by the cops after they confiscated it and smoked it from the teenagers on the corner. Nouwen writes

“if anything has affected me deeply since I have been living in Pamplona Alta, it has been the children…. I wondered how the poverty, the lack of good food and good housing would affect me; I was afraid of becoming depressed at the misery I would see. But God showed me something else first: affectionate, open and playful children who are telling me about love and life in ways no book was ever able to do” (123).

Several times he describes his “dream,” a dream and hope I had as well after my time spent there – “More and more, the desire grows in me simply to walk around, greet people, enter their homes, sit on their doorsteps, play ball, throw water, and be known as someone who wants to live with them. It is a privilege to have the time and the freedom to practice this simple ministry of presence.” And yet, we are lured away from this by “my own desire to be useful, to do something significant, or to be part of some impressive project” (147-148). In a separate entry I described other books I read during my time in La Carpio that give examples of people that are experimenting with this type of “dream,” and actually doing it. I decided after leaving La Carpio that if I ever get the chance to do something like this again, I would want it to be in a community of like-minded people, or I’d want to link it more usefully to a larger project. It seemed like a lot of work to go to just to teach me some important lessons. I so often felt helpless in the face of the obstacles threatening our barrio, and I longed for a more unified team of people committed to doing something about it.

Nouwen doesn’t actually remain living and working in Peru… he goes on to do different things. There isn’t much of an explanation as to how that happens. But that isn’t the point of the book, and although it is one of the most pressing questions for me after leaving (does God call me to live and work in La Carpio, in Costa Rica, in…?), the best “encapsulation” of my time living in the community of La Cuarta parada de La Carpio en San Jose, Costa Rica, is a heartfelt ¡Gracias!, a profound gratitude that I strive to live out and extend to every other aspect of my life, now outside that special community.