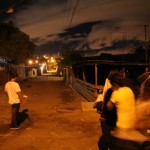 The video below shows a “slice of life” from La Carpio, with some videos and images from celebrations and everyday life. Some explanation may help, however.

The first scenes with the smoldering heap at the base of the stake and the fireworks are from New Years’ Eve celebration. A human-sized dummy is made from pillows and old clothes, stuffed with firecrackers, hung from a pole, and dowsed with gasoline. At midnight, to symbolize the passing of the old year, the dummy is lit on fire, bursting into flame and falling into a heap. Meanwhile, the crowd in the streets is privy to the elaborate fireworks displays from some of the nearby resorts and hotels.

The Caterpillar earth mover is digging an underground trench through the middle of the road for cement piping to help with drainage of rainwater and sewage. This was installed in the latter part of 2010. You can see how a towering wall of dirt blocks most of the entrances to people’s homes, and everyone just has to walk over it to get anywhere. The kids played “trapped Chilean miners” in the huge cement tubes that were inserted in the trenches.

The images from inside the home are from birthday parties and a baby dedication. They are taking apart an entire room and the girls’ bunkbeds in order to expand the front room about a meter to hold more kids. The enormous cake and huge birthday party was for their daughter’s first birthday. About 100 kids came through that evening. The girls’ room was reconstructed before we went to bed.

The bridge crosses El Rio Torres, the southern border of La Carpio, connecting it for pedestrians to Pavas and the train shown at the beginning of the video. The bridge is often in disrepair. There are various scary stories about this footpath and the lower part of the slum closest to the river.

The video with the kid on stilts is taken from in front of the home where I lived. The kid on stilts and some of the other guys are a couple of our star computer students. The alley to the right is where you can buy carne asada and salchipapas on weekends. Some obnoxious fighting cocks are tied to the scraps of metal that form the wall to my bedroom that would waken me each day long before dawn. The man on the left is sprinkling water into the street in front of his home to keep the dust down. Many people do this to prevent dust from coating the insides of the houses when a car goes by or the wind picks up. It also irritates many kids’ lungs.

The still photos at the end of the video are from a baby dedication for the youngest member of the household where I lived. He is one happy kid. I try to imagine what it will be like for him growing up in his neighborhood.