I wasn’t surprised to be present when a full-blown “operative” was executed against our barrio on June 30th. What was surprising was how normal it seemed to everyone around me.

An “operativo” or redada (raid or operative) is when the OIJ (FBI equivalent), law enforcement dressed like SWAT, pour into every nook and cranny of the neighborhood and arrest a list of targeted criminals. The operativo is executed by special forces uniformed in black with helmets, masks, black stockings covering their faces, and toting high-caliber weaponry. The newspapers later reported that 13 minors and 9 adults were detained, and there was no resistance.

The raid began at 4.A.M., when I remember waking up to the rushed patter of feet running past on the dirt road outside my bedroom. I went back to sleep not thinking anything of it, because there are always noises of people or animals moving in the street outside my bedroom.

When I stumbled out of my bedroom a couple hours later, everyone was at the entrance to the house peering up and down the street. There are a lot of early risers in La Carpio leaving early for work or school, which generates a lot of bustle in the morning hours, even before sunrise. However, this morning there are visitors in uniform and cars with tinted windows rolling slowly up and down the street in front of our house. Four uniformed motorcycle police perched on the corner, with curious kids sitting around them and watching from the curb. My host brother squatted in front of the pulperia (house-store) and played with his yo-yo-top in the dirt around the policemen so he could watch the event unfold. People peered from doorways to witness the spectacle in case anything dramatic happened, but nothing abrupt broke out. Probably the more sensational entries had been conducted early in the morning and we were currently witnessing minor interrogations and searches. 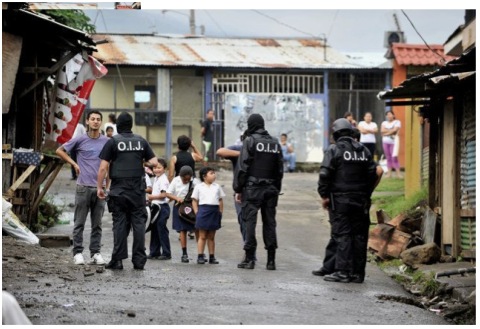 I watched for a while and listened to the commentary of the people in the home, recounting how family members had narrowly escaped being questioned or ID’d. At this point, the exits to the main road were blocked by police tape and OIJ officers checking ID’s. Nobody made it through without being ID’d and searched – not people on the way to work, not teachers, not even kids in school uniform with backpacks. The family watched and lightly ridiculed students that ascended the hill to the main road, and then returned because they had no I.D. Estaci, my 10-year-old host sister, tried to make it through later that day but was turned around, and took a long side route through other parts of the barrio to get to class.